In this episode of “Celebrity OS Deathmatch”, we… oh sorry, wrong channel! In part 3 of my “Making Apple TV Apps” series, we’re looking at the framework differences between iOS and tvOS in detail. 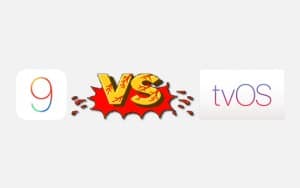 Apple added three frameworks to tvOS for the initial 9.0 release. They are:

We’ll look at all three of these new frameworks in depth in later parts of this series.

Unfortunately, the list of frameworks Apple removed for the release of tvOS 9.0 is a lot longer.

Some of these removals make sense, as the hardware they support isn’t present in the Apple TV. There is also hope that at least some of the missing frameworks will eventually make an appearance in tvOS. MapKit, for example, was just added in the latest March, 2016 9.2 update. In the meantime, if your existing app is impacted by these removals, you’ll have to make a decision to wait for future support or find another way to implement those features in your app.

In addition to missing frameworks, there are several user interface controls seen in iOS that aren’t provided in tvOS. Pickers, steppers and sliders don’t yet have a tvOS equivalent, at least not from Apple. Search around GitHub and you’ll find lots of interesting tvOS open source projects, many of which are aiming at filling in the UI gaps left open by Apple.

In the next part of this series, we’ll talk about the restrictions Apple has placed on app size and data storage, as well as their recommendations on how to handle them. With 14 articles in total, I hope you’ll continue to visit and follow along with the series or, even better, sign up to receive them in your inbox as soon as they’re available.